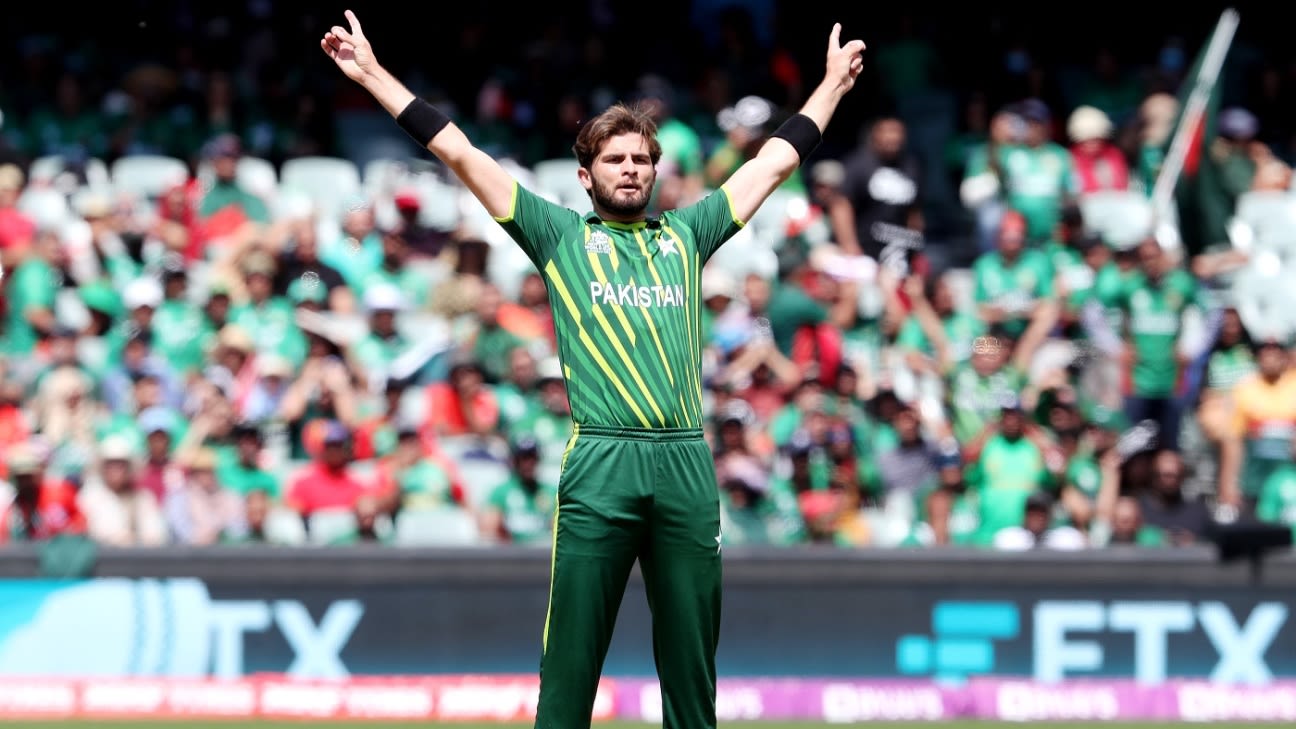 A team under pressure. A captain refusing to give up. The odds piling up against them. And then one fine day, the stars align.

Pakistan cranked up the deja vu in Adelaide on Sunday as they sailed into the T20 World Cup semi-finals. If anyone is still working on time travel, please follow this cricket team. They’ve made it 1992 again.

Bangladesh were 70 for 1 after 10 overs. Then they lost their captain and could manage only 127 for 8. Advantage Pakistan.

Wasim Akram liteShaheen Shah Afridi admitted he’s not 100% at this tournament. Someone should splice that press conference video with the ball he bowled to Mosaddek Hossain. Left-arm. High pace. Around the wicket. Reverse swing. Bowled ‘iiiiimmmmmmm!
Growing up, he would have shoved Wasim Akram videos straight into his veins. Now, he’s recreated his idol’s most famous dismissal on the grandest stage with everything on the line. How many people get to do that? How many people are good enough to do that?
The good, the bad and the collapseNajmul Hossain Shanto (54 off 48) was smiling. His leading edge had pretty much bunny-hopped for four over point. That was the first over. Back when Bangladesh had gained a sizeable advantage batting first on a used pitch where shot-making got harder as time went on.

Even halfway through, they were sitting pretty. Then it happened.

Shadab Khan looped one up over the batter’s eyeline. Shakib accepted the invitation and came charging out of his crease. The legspinner’s dip deceived him. A big hit turned into a scramble to put bat on ball.

Shakib thought he did. Umpire Adrian Holdstock on field didn’t. DRS came into play, and everything turned murky. UltraEdge showed a spike, but the third umpire Langton Rusere thought that was bat hitting ground. Only there seemed a fraction of daylight between those two things.

The on-field decision was upheld. And Shakib was distraught. He kept standing there, swinging his arms around, wondering what was going on. The Bangladesh captain had to literally be pushed out of the field.

That wicket was part of a procession: 6 for 36.

Another expensive no-ballThe Adelaide pitch wasn’t great for strokeplay. Batters kept trying to hit out but it just wasn’t happening. On the broadcast, a telling stat came up: the strike rate when pace was on was 122, but it was only 28 when pace was off.

That kept Bangladesh in it. That’s the reason this game was even alive. Remember, earlier in the day, on this very surface, South Africa came undone against Netherlands’ slower balls to turn this into a quarter-final.

Babar Azam and Mohammad Rizwan put on their first fifty partnership of this T20 World Cup. But Bangladesh fought back.

They were an angry team. A team raging against the way the world was working. At one point, when an lbw didn’t go Bangladesh’s way, Shakib grabbed his cap and flung it into the turf. They could easily have been distracted by these things but they kept at it.

They pushed this game into the death – and then unravelled.

Taskin Ahmed, who could have had a wicket in his first over if not for a bad fumble from the wicketkeeper Nurul Hasan, who has carried his team on his back in these Super 12s, overstepped.

The equation was 30 off 28. They had taken a wicket five balls ago. The pressure was piling on Pakistan.

Then – much like in that game against India – a team that desperately needed a free-hit got one. And 21-year old Mohammad Haris whacked it for six.

Pakistan are into the knockouts now. They even returned the favour to Netherlands, giving them a great chance of finishing fourth in Group 2 which ensures they will play the next T20 World Cup.

Now, if India beat Zimbabwe in the last group game on Sunday, Pakistan will travel to Sydney, where once again conditions have been very helpful to slow bowling. Conditions that could favour Babar and his men if they go up against New Zealand in the first semi-final.

Alagappan Muthu is a sub-editor at ESPNcricinfo