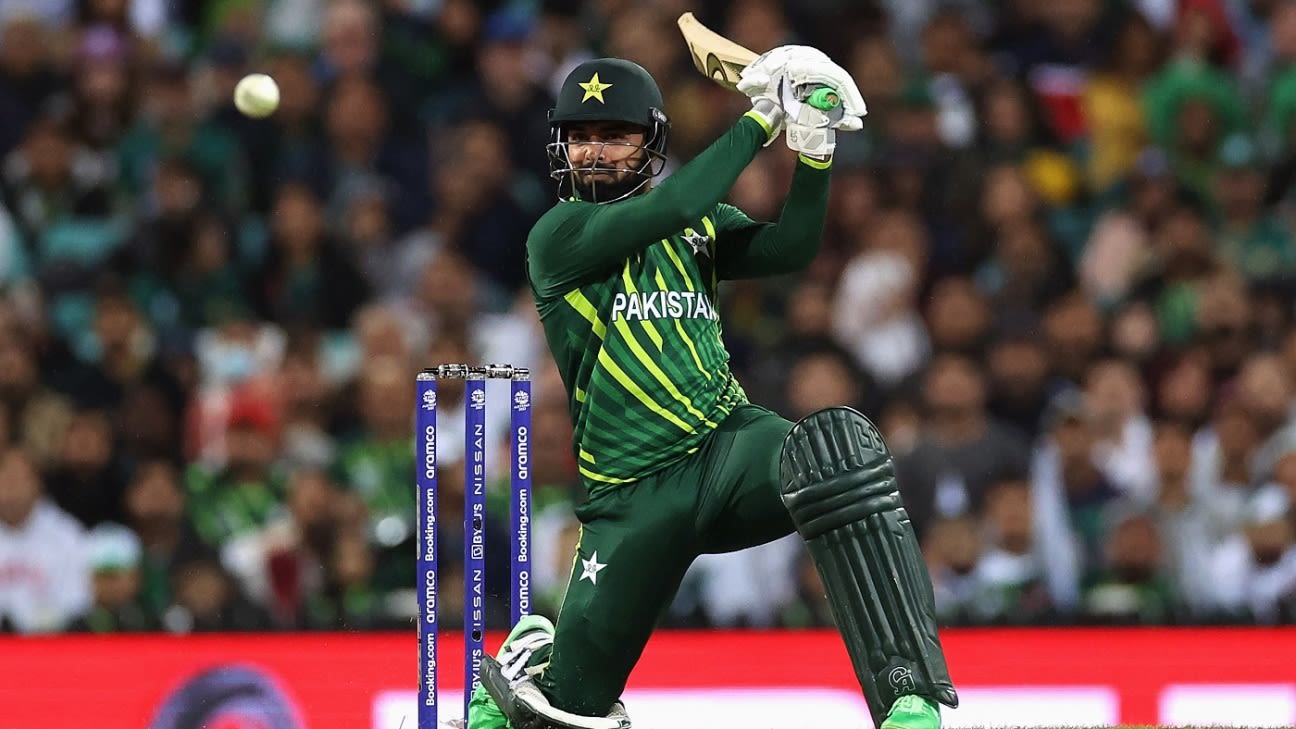 Pakistan have kept their semi-final hopes alive with victory in a rain-reduced, must-win match over their favourite opponents: South Africa. They’ve met four times at T20 World Cups and Pakistan have won all four encounters. With this latest result, there are now no unbeaten teams left at this World Cup.

On a chilly Sydney evening, against the express pace of Anrich Nortje and the craftiness of Lungi Ngidi’s slower ball, Pakistan recovered from 95 for 5 to post their fifth-highest score against South Africa, and highest at World Cups. While their top order failed to fire once again, Iftikhar Ahmed and then Shadab Khan scored half-centuries to get Pakistan to a competitive score. They were helped by a sloppy South African fielding performance. They dropped five catches – more than they have in the other three matches in the tournament combined – and there were several fumbles on a slippery outfield.
Pakistan were set up with the bat, but won the match with the ball. Shaheen Shah Afridi dismissed Quinton de Kock and Rilee Rossouw cheaply but Temba Bavuma played his best innings of 2022 and the chase was going well until the start of the eighth over. South Africa were 65 for 2, ahead of the DLS par of 58 at the time, when Shadab found Bavuma’s edge. At the fall of the wicket, the DLS par went up to 66 and it increased to 77 two balls later when Aiden Markam was dismissed. By the time play was interrupted after nine overs, South Africa needed to be on 85 to win, but were 69 for 4.
An hour’s interruption cut six overs off the chase, and when play resumed South Africa needed 75 runs off the remaining five overs. Tristan Stubbs and Heinrich Klaasen – who came in for David Miller, who was out with back spasms – biffed it around a bit but the ask was always going to be too tall. South Africa remain second on the Group 2 points table behind India, and need to beat Netherlands on Sunday to keep their fate in their own hands.
Haris’ hit outMohammad Haris was parachuted into the Pakistan XI after Fakhar Zaman suffered a tournament-ending recurrence of the knee injury that he has struggled with this year, and he made an immediate impact. He was hit on the grille the second ball he faced – a Wayne Parnell short ball – and that seemed to spark him into action. He tucked into Kagiso Rabada’s opening over, and sent a half-volley over deep backward square for six, then a pull over fine leg for six more before creaming another short ball through square leg to cost South Africa their most expensive over of the tournament so far: 17 runs.

Haris demonstrated a clear strength playing the ball on the leg side, complete with a shuffle across the stumps, and it was his undoing too. He missed an Anrich Nortje delivery, was hit in line with off stump, and given out lbw. His 28 off 11 balls gave Pakistan’s Powerplay some impetus, and they finished with the highest Powerplay score of the tournament, 42, even though they lost their top three.

Nawaz: out or not-out?Iftikhar Ahmed and Mohammad Nawaz helped Pakistan recover from 43 for 4 with a 52-run fifth-wicket stand. They had some nervy moments up front, when Iftikhar gloved the ball skywards, to Quinton de Kock’s right. De Kock made a valiant one-handed effort and could not hold on. Two balls later, Nawaz got a thick edge wide of de Kock, but the pair didn’t look back from there.

Iftikhar took advantage of misfired lines and lengths from Rabada and Nawaz got hold of Ngidi and then Shamsi. He slogged Shamsi over deep midwicket and then shaped up for the sweep but missed and was struck on the front pad. Nawaz set off a for a run as he was given out, and then Lungi Ngidi’s direct hit found the stumps. Nawaz must have thought he was run out and didn’t review. Replays showed he got a thick bottom-edge, and also that he made a mistake. The ball would have been dead the moment the umpire raised his finger – before Ngidi’s throw – according to law 20.1.1.3. Nawaz would have been not out.

But maybe not such a bad thing Nawaz’s dismissal brought Shadab Khan to the crease and Pakistan could not have asked for anything more. Shadab took a liking to Shamsi and scored 13 runs off his final over, which cost 15 in total, before launching an Ngidi full-toss to deep backward square for four, driving Nortje through mid-off for four more and uppercutting him for six. Nortje chose to bowl full at the end and got an attempted yorker wrong. Shadab sent the full-toss into the stands and then another over long-on, to bring up fifty off 20 balls – Pakistan’s second-fastest fifty in T20I cricket. He put Pakistan in touching distance of 200 but then went big once too many times, was dropped by Aiden Markram at long-on and then caught by Tristan Stubbs at deep midwicket.

Pakistan’s frantic finishShadab’s dismissal set in motion an intense end to the innings in which Pakistan lost four wickets for eight runs as Pakistan tried to breach the boundary with every ball. Mohammad Wasim top-edged Nortje and Bavuma zooted in from the ring to take a running catch. In the last over, Iftikhar opted to take on Rabada and hit him to long-on where Rilee Rossouw took a superb catch. And Haris Rauf was run-out off the last ball, as Pakistan scrambled to run a fourth. Bavuma was the man who broke the stumps.

Afridi’s amazing start Pakistan’s ace had a quiet start to the tournament, with just one wicket from the first three matches, and explained he was working his way to a full head of steam after returning from injury. He got there in this match, when he started with a series of back-of-a-length deliveries to de Kock, who was eyeing the midwicket area but not finding it. De Kock got there off the last ball of the over, but toe-ended his effort to Haris on the edge of the ring. De Kock was dismissed for a duck. In his next over, Afridi pulled in South Africa’s big fish, Rossouw, with a ball that did not deserve a wicket. It was short, wide and screamed “hit me”, and Rossouw obliged. He slashed to deep third where Naseem Shah ran around to take the catch. South Africa were 16 for 2.

Shadab’s double strikeBavuma played his most pleasing and profitable innings of 2022, and scored 36 off 18 balls (which included a scoop for six, which he tried and failed to pull off earlier in the tournament) and the hoodoo seemed to be broken. But Shadab continued to own the night when he was brought on in the eighth over. He delivered a stock-standard legbreak, Bavuma opened the face of the bat to try and hit to third, and nicked off. This strike was crucial, because with rain looming, it put South Africa behind on DLS. After 7.1 overs, at two down, the DLS par was 59. With three down, it jumped to 66. South Africa were on 65 at the time. And it got worse for them. Two balls later, Shadab bowled Markram with a topspinner, as the batter went back to try and cut, and South Africa were 66 for 4. The teams were taken off nine balls later, and it was clear that Shadab had had a decisive hand in this match.