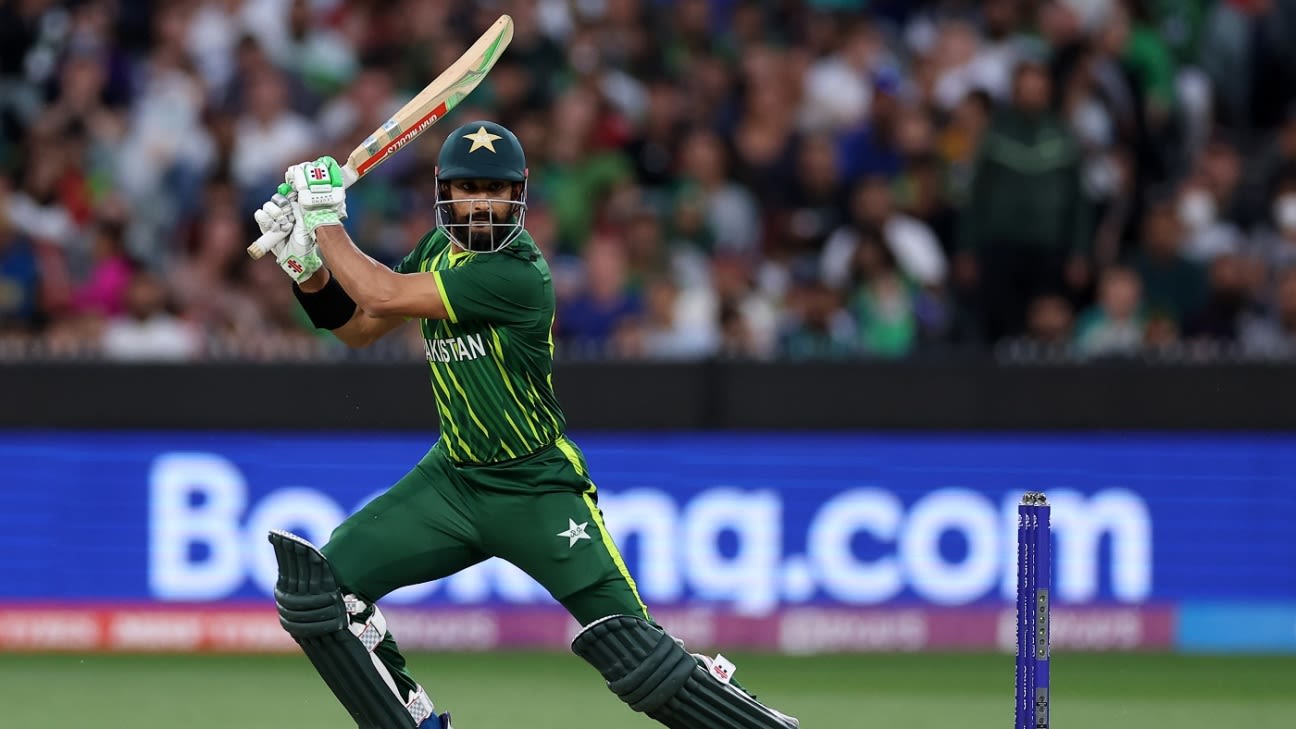 At the last T20I World Cup 12 months ago, Shan Masood was doing commentary work with ESPNcricinfo. Two months ago, he had never played a T20I for Pakistan.
Yet, immediately after Pakistan’s five-wicket loss to England in the T20 World Cup final, he was the one sent out to the MCG press area to try and make sense of a dispiriting evening for Pakistan after finishing as their top scorer in the game. After a middle-order stutter, he had built up a 36-run stand off 25 balls with Shadab Khan, laying the groundwork for a big finish, before both fell in the space of six balls and Pakistan’s innings melted away.

Masood considered himself and Shadab responsible for the wheels coming off the innings. “When Babar and I were batting, we built a very good platform and then lost two wickets” Masood said. “We recovered that with Shadab and myself and then I don’t think we finished well and I think me and Shadab hold ourselves accountable for not staying there.

“There were stages, especially with the bat where we could have finished the innings really well. Personally, I take blame for it. I thought that we’re aiming for 170 and having looked at how the innings ended, maybe we could have used with a batsman staying until the end and getting us to 155-160 which looked very good on a pitch that did something.”

The pitch continued to “do something”, as Masood said, right through the second innings. Shaheen Shah Afridi shaped one in that cleaned up Alex Hales in the first over, while Naseem Shah repeatedly beat both the left and right handers’ outside edges in a sensational, albeit luckless, spell.

Haris Rauf ended up with figures of 2 for 23 and was particularly fearsome early on, ensuring Phil Salt and Jos Buttler had been dismissed before the powerplay was out. The spell was central to Pakistan managing to make a low target as hairy as they did for England, though Rauf rued the lack of another 15 runs or so to defend.

“We were short a few runs, but as a bowling unit, we stuck to our plans,” Rauf said. “They played well and deserved to win. We had control of the match until the Shaheen injury. Ben Stokes was quite lucky and kept missing the outside edge, but we did think Shaheen not being able to bowl out make a difference. I’ve played a lot of cricket at the MCG and everyone knows scoring runs here is tricky; the boundaries are big. If we had 150 on the total, that would have posed more questions to them. But we bowled well to take it so close.”

A campaign that had begun with two final-ball losses ended with a defeat in the final game for Pakistan. Four wins and three defeats might not necessarily be runner-up form, but Masood pointed out the nature of the wins and losses revealed a more insightful picture of Pakistan’s campaign.

“I think we can sum it up with the wins and losses. I think the games that we have won, we’ve won them pretty comfortably. And the good sign always is that when you lose, you lose close games. So you realise that those things are in your own hands. The three games we lost to India, Zimbabwe and even the final there were opportunities where we could have closed out those games.

“You make mistakes, not just when you lose you also make mistakes when you win. So I think the side is very good at doing that. The side is very good at holding itself accountable. We played the World Cup semi-final last year, lost a close semi final, played the Asia Cup final and the World Cup final. The next step this young team has to take is finishing out games, finishing out close moments. The way Babar is leading this team, the leadership group in Shadab and Rizwan and this management, I’ve got no doubts that with future World Cups coming this side will be a constant threat and amongst the top teams.”

Masood was key to Pakistan’s charge through the early middle overs, most notably when he took 16 off Liam Livingston’s only over to leave Pakistan in a relatively dominant position at 84 for 2 in 11 overs. It’s been quite the journey from a Test match specialist and a T20 novice to Pakistan’s central hope in a World Cup final.

“Funnily enough, I was watching the last World Cup with ESPNcricinfo doing some commentary work,” he said. “Life can change but I think personally in my life there’ve been huge lessons which has allowed me to be freer, enjoy the game more and be the best version of myself. I’ll never be satisfied with what I do. There are things that I want to improve in my game and hopefully I’ll keep working on them and keep growing as a player.”

Danyal Rasool is a sub-editor at ESPNcricinfo. @Danny61000