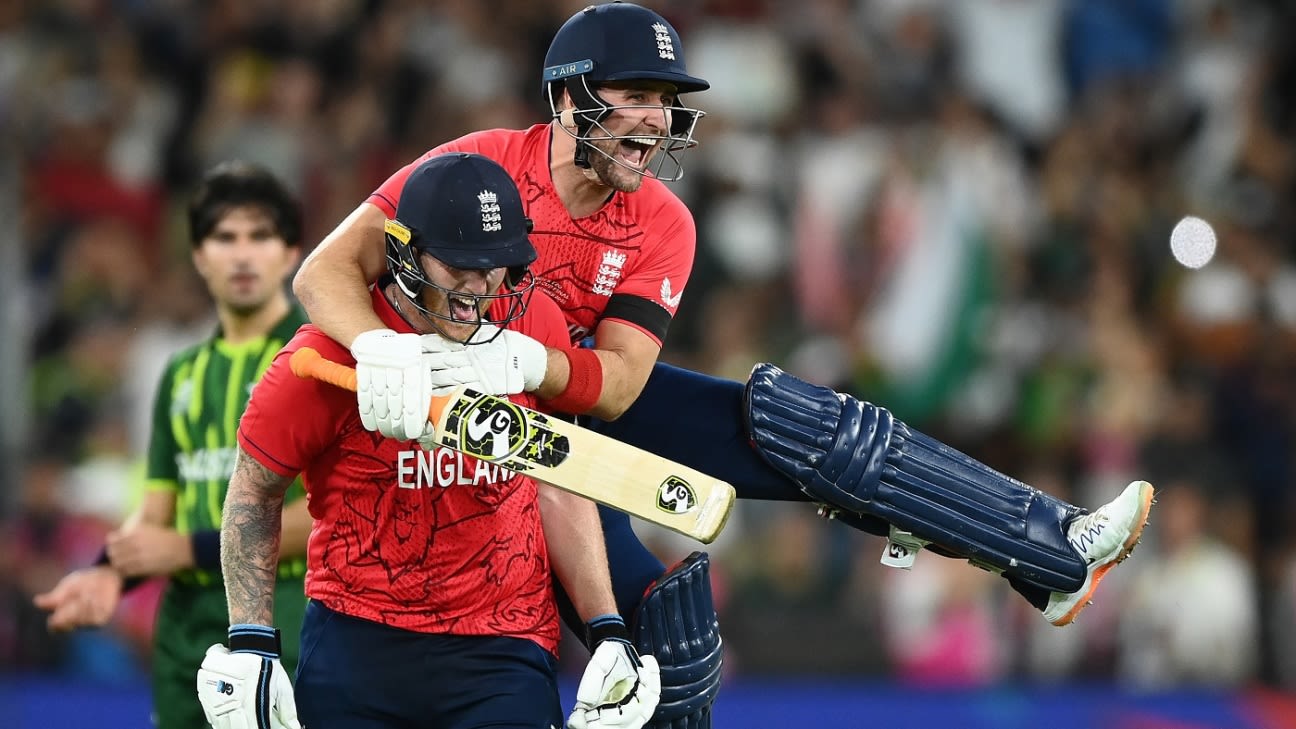 England became the first team to hold both men’s World Cups simultaneously, sneaking past Pakistan in a tense run chase to win the 2022 Men’s T20 World Cup final at the MCG by five wickets with an over to spare.

Ben Stokes, England’s match-winner in the 50-over final three years ago, anchored another run chase and ground out his first half-century in T20 internationals in the format’s biggest game. He had battled to 24 off 34 balls, but a late flurry of boundaries removed the scoring pressure.
The game changed in the 13th over of England’s chase when Shaheen Shah Afridi slid forwards to complete a catch off Shadab Khan, dismissing Harry Brook. Pakistan’s celebrations were cut short when they realised that Shaheen had jarred his right knee, which had once threatened to rule him out of the tournament.

He received some treatment and attempted to return for his third over with 41 needed off 30 balls, but pulled out of his run-up once, then sent one down to Moeen Ali at 71mph/114kph. Iftikhar Ahmed completed his over and Stokes targeted him: he miscued him just short of long-off, but then slapped him through cover for four and launched him back over his head for six.

When Moeen started the next over with back-to-back boundaries off Mohammad Wasim, the required rate was below a run a ball. Wasim returned to york Moeen, but Stokes crashed him through cover then hauled him through the leg side to secure England’s title.

Curran strikes early – and late
England primarily used Sam Curran at the death throughout this T20 World Cup but his role shifted slightly in the knockout stages. Chris Jordan’s inclusion, replacing the injured Mark Wood for the last two games, meant Curran bowled a second powerplay over in both the semi-final and final.

It proved crucial. Pakistan started slowly after being asked to bat first on a slow pitch, with Mohammad Rizwan’s slog-swept six off Chris Woakes their only boundary in the first four overs, and Curran – in his second over – struck as Rizwan looked to up the tempo, inside-edging a booming cover drive onto the base of his leg stump.

Curran returned at the death and had both Shan Masood and Mohammad Nawaz caught by Liam Livingstone at deep midwicket, using the MCG’s vast square boundaries to his advantage. He finished with remarkable figures of 3 for 12 across four boundary-less overs, winning awards as both player of the match and the tournament.

Liam Livingstone completes a catch to send Shan Masood back, his first of three in the death overs•Getty Images

Rashid finds his form
It was a World Cup of two halves for Adil Rashid: he took combined figures of 0 for 89 in 12 overs across his first three appearances, but England insisted they were confident that he would come good when it mattered. He delivered in style, taking 1 for 16 and 1 for 20 against Sri Lanka and India, then made two crucial breakthroughs in the final.

Mohammad Haris, Pakistan’s dangerous No. 3, ran down the pitch and tried to clear long-on off Rashid’s first ball but holed out to Stokes, and neither Babar Azam or Shan Masood could get him away. Instead, Masood took on Livingstone, crashing him back down the ground for four and then six to take 16 off his only over.

But Rashid struck with the very next ball, Babar miscuing his googly back to him, and then delivered a wicket maiden as Iftikhar struggled to read his variations. He conceded his only boundary in his final over when Shadab slapped him back over his head during a stand of 36 with Masood – but regular wickets at the death restricted Pakistan to 137.

Chaos in the chaseHeading into the final, one key battle stood out: England’s opening batters against Pakistan’s new-ball bowlers. Jos Buttler and Alex Hales had demolished India in their semi-final but Shaheen, Naseem Shah and Haris Rauf stood out as the best pace trio in the tournament.

Shaheen landed the first punch, ripping Hales’ middle stump out of the ground with a full ball that brushed his back pad on the way through, but Buttler countered: Naseem overpitched, desperate for another early wicket, and was pinged through the covers for consecutive boundaries.

Phil Salt, batting for the first time in the tournament after Dawid Malan failed to recover from a groin strain, got two early boundaries away. But he picked out short midwicket off Rauf when looking for a third, who roared in celebration.

Naseem’s second over was sublime, but somehow cost 11 runs despite him beating Buttler’s outside edge five times thanks to one wild ball down the leg side and an audacious, trademark scoop shot which flew away for six. Rauf reaped the rewards in the following over as Buttler edged behind, and England finished a chaotic powerplay 49 for 3.

The Stokes showWith the required rate in check, Stokes and Brook opted to dig in for the next six overs, looking to minimise dot balls without taking undue risks. Both struggled for timing as the ball got older, and boundaries were hard to come by: Stokes scored a single run off his first nine balls after the drinks break, and was repeatedly beaten by Naseem in another brilliant over.

Stokes looked to have dug himself into a hole with 45 required off 31 balls, but cut the final ball of Rauf’s third over away for four to relieve some of the pressure and when Shaheen gestured to the dug-out that his night was over, he sensed an opportunity. He threw his head back in disbelief when he mistimed his first ball from Iftikhar, the part-time offspinner, towards Babar at long-off but it fell short, and he pummelled his final two balls to the boundary.

With scores level after he had brought up his maiden T20I fifty with a slap through the off side, Stokes swung and missed at Wasim and then muscled him away for the winning run. As England’s bench ran onto the pitch in celebration, they did so with their legacy as one of the great limited-overs teams secured.

Matt Roller is an assistant editor at ESPNcricinfo. @mroller98