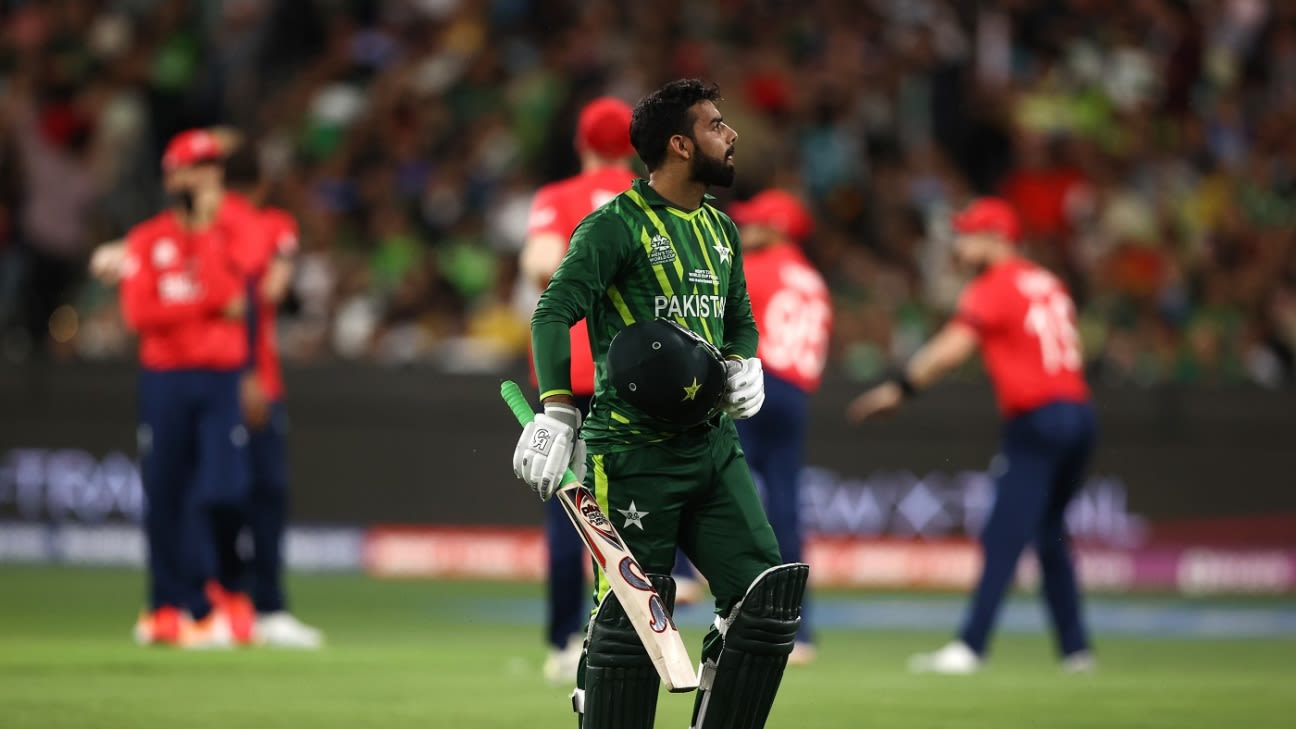 Pakistan were 119 for 4 after 16 overs in the T20 World Cup final against England at the MCG but managed to score only 18 for the loss of four wickets in the last four overs, and their approach at the death was a “massive mistake” according to former New Zealand captain and current Chennai Super Kings coach Stephen Fleming.

“[Pakistan were] 121 [119] for 4 in 16 overs. There’s enough in that wicket to suggest that a 165-score is going to be a real good challenge,” Fleming said on ESPNcricinfo’s T20 Time Out show after the first innings. “There was inconsistent bounce, there was a little bit of movement on offer and it was turning.

“So as a unit, you should be saying that ‘we’ve got some artillery here, we know that we just need to get a score on the board and we will be competitive’. The fact that the last four overs went for 16 [18] runs, I think that’s a massive mistake.”

“Even at 10 [runs per over], you get to 161 and if you have one good over, you get to 165 which I think is more than competitive given what we have seen,” Fleming said. “Especially given the turn, which was unexpected, and the little bit that’s on offer for probably a quicker and more skilful pace attack. So yeah, there was a lot going on up to that point, but Pakistan missed a massive trick.”

Fleming said that Pakistan did not read the ground dimensions and conditions well. “Teams often go to the MCG and they think traditionally, we’ll get to 16 overs and then we’ll whack ourselves 15 runs an over and we’ll get a great score. The MCG is not that ground. If there’s any research that should have been done is on how to finish off an innings.”

Pakistan’s last three recognised batters – Shan Masood, Shadab Khan and Mohammad Nawaz – were all caught attempting the big hits at the MCG. “The ones and twos that were so good all the way through the innings, they disappeared and all of a sudden they were just trying to hit it out of the ground over 85 metre boundaries,” Fleming said. “And that just doesn’t work. Livingstone’s there, just picking it off. Sorry, I reckon it just wasn’t smart and it could cost them, the score of 165 was easily there.”

Former Australia allrounder Tom Moody said that Masood, who scored 38 off 28 in the final, laid down the right template with his running between the wickets.

“We saw Shan Masood show the way to how to score runs at the MCG. His running between the wickets was superb, the twos that he ran, the pressure he put on the outfield, that didn’t really need to change,” Moody said, adding that Babar Azam’s dismissal was the turning point in Pakistan’s innings.

“I think it was in the 12th over Babar was dismissed, and from then onwards, it just went south where they just seemed to lose sight of how to accumulate runs and get to that 160-165 that Flem’s [Fleming] talking about,” Moody said. “In a total of 120 balls, if you’re scoring six fours and two sixes [Pakistan scored eight fours and two sixes], I think that shows more than anything that no one else really got in on that surface to be able to in those last four overs pick off a few boundaries.

“It was a pretty disappointing finish from Pakistan, they should be more than what they got and it’s really down to some poor management with their batting in the back 10 overs.”

Former India captain and head coach Anil Kumble said Masood’s dismissal put the pressure back on Pakistan. “I think, like Flem [Fleming] mentioned, they were probably thinking boundaries and sixes and that’s what you are sort of tuned to in the last four overs. I think Shan Masood getting out at that time certainly put the pressure back on Pakistan, because he was someone who looked comfortable and he was in control of his scoring,” Kumble said.

“And that’s something I didn’t see in even Babar, even though Babar batted well till he got out. Shan Masood looked in better control of the proceedings, in terms of how he wanted to manoeuvre the bowling.

“That’s something, once he got out, it put pressure back on Pakistan batters and they only looked for boundaries which never came.”